Her birth name was 'Wilella', she was called 'Willie' by her parents. 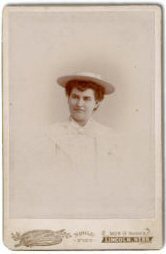 Willa Cather is considered one of Nebraska’s most distinguished writers. Cather was born on December 7, 1873 in Winchester, VA. When Willa was 9, her family moved to Nebraska, first to a ranch and then to the community of Red Cloud. It was there that her father purchased the local newspaper, The Republican Chief, and installed Willa (age 15) as the editor and business manager. The young Cather was a late witness to the final closing of the frontier on the Great Plains and to the lively and diverse European immigrant cultures of the new settlers. She gained a deep understanding of this historical moment that would greatly influence her as a writer.

At the age of 17, Cather moved to Lincoln, eventually to attend the University of Nebraska-Lincoln. While enrolled at UNL, Cather made a reputation as an eccentric — wearing her hair cut in a man’s fashion, and often wearing men’s clothing. In 1893, Cather began writing a column for the Lincoln Journal newspaper, and in 1894 she became the Journal‘s drama critic. At the same time, she was a regular contributor to the UNL magazines Hesperian and Lasso. After two years with the Lincoln Journal, Cather moved to a position as associate editor with the Lincoln Courier, a society, art and literary paper, where she remained until shortly after her 1895 graduation.

After graduation, Cather left Lincoln for Pittsburgh, where she worked for both the Pittsburgh Home Monthly and Pittsburgh Daily Leader until 1905. During this period, Cather made the first of several trips to Europe, and saw the publication of her first collection of stories. In 1906, she began working for McClure’s Magazine in New York City, first as editor then as managing editor. The advice of fellow writer Sarah Orne Jewett convinced Willa to dedicate more of her time to her own writing, and to creating her own literary voice. During the next two decades, many of Willa Cather’s great works of American literature saw print — often featuring settings and characters drawn from her Nebraska upbringing.

Though Cather never returned to Nebraska to live, Red Cloud considers her a native daughter, and the strong regional themes of many of her novels identify her as a Nebraska author. Cather died in New York on April 24, 1947. Cather's writing continues to attract a wide readership, as well as historical and critical interest and acclaim. The majority of Cather’s novels remain in print. She is one of the most important, and most admired, American writers of the first half of the twentieth century.

Many of Willa Cather’s shorter novels and short stories have been reprinted in a variety of collections — both under Cather’s own name, and in anthologies by a variety of authors. If you search the Lincoln City Libraries catalog for “Cather, Willa”, you will find all of the titles listed below — many in multiple different editions and/or languages — as well as numerous other “titles”, which are often individual short stories from her well-known collections that have subsequently been reprinted as stand-alone volumes.

See first of all the longer on-line biographical sketch by Cather scholar Andrew Jewell, part of the on-line Willa Cather Archive, one the foremost digital humanities projects in the United States, hosted by the University of Nebraska. The site can guide you to many other digitized materials including, for example, all of her short fiction pre-1912, various interviews, speeches, and public letters, her uncollected periodical nonfiction from the 1910s, and much else, including born digital Cather scholarship.

James Woodress, Willa Cather: A Literary Life, 1987, is considered the leading scholarly literary biography. (And Woodress's papers are in the UNL Archives and Special Collections Cather Collections, noted below.)

Andrew Jewell and Janis Stout, ed. The Selected Letters of Willa Cather, 2013. The publication of these letters has been the largest Cather event of recent times.

Archives (Listing only the most notable and local):

The Nebraska State Historical Society has a small Cather collection.

The Albert and Shirley Small Special Collections Library at the University of Virginia has a significant collection.

The Newberry Library in Chicago has Cather collections. This is notable for containing the Benjamin D. Hitz – Willa Cather Papers, 1913-1949 (with an on-line inventory). Hitz was a collector of Cather first editions and this collection contains his correspondence about editions with some of the leading booksellers of the day, as well as original Cather letters.

Nebraska 150 Books honor for My Ántonia, O Pioneers!, and One of Ours, 2017
“150 Notable Nebraskans”, Number 1 on the Journal Star Sesquicentennial List of Significant Nebraskans
Pulitzer Prize for One of Ours,1923
Medal of the American Academy for Death Comes for the Archbishop
Nebraska Journalism Hall of Fame
O' Pioneers! selected as 2013 One Book One Nebraska

Associate Editor of the Lincoln Courier (1895)
Her father bought the Red Cloud Repubican and Willa was installed as the editor and business manager-- she conducted the paper for six months prior to entering the University of Nebraska.
She edited the college paper The Hesperian for a year and was managing editor for a year
Edith Lewis
Louise Pound
Alvin S. Johnson knew Cather as a student and later recruited her to serve on the board of The New School for Social Research