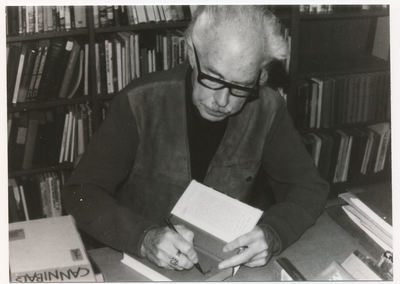 Wright Morris in the Heritage Room

Morris received critical acclaim for his literary work, and many awards, but never achieved the broader kind of fame that would be expected to go with the level of critical interest he received.

Morris traveled extensively through Europe during the early 1930's. He had a major photographic retrospective 'Wright Morris: Origin of a Species' at the San Francisco Museum of Modern Art. He wrote in many different genres and is sometimes credited with the invention of a new genre in his "Photo-Texts." Literary critics sometimes compare him to Sherwood Anderson and Sinclair Lewis; Willa Cather evinced a similar strong sense of place but her writing style was more traditional. He has also been compared to Louise Erdrich, in aspects of his writing style and sense of place.

By chance, in the 1945, Wright Morris and his first wife and Loren Eiseley and his wife Mabel lived in the same apartment building near the University of Pennsylvania, and the two men became friends.

Heritage Room collections at Lincoln City Libraries include page proofs, some corrected manuscript pages, the Wright Morris-Victor Musselman Correspondence, Wright Morris-Gale Christianson letters in our Christianson-Eiseley collection, galley proofs for About Fiction, and A Life. Correspondence between Jane Geske and Wright's widow about the appraisal and sale of his book collection are in our vertical files. See also Magazines in gray flat archival box, Heritage Room office. There are signed materials, e.g. the pamphlet The Writing of My Uncle Dudley in the Wright vertical files, and many additional magazines.

There are two major collections of Wright Morris materials. The University of California, Berkeley's Bancroft Library has 22 linear feet of materials dated 1934-1980, and there is an on-line finding aid. The University of Nebraska-Lincoln Archives & Special Collections has many linear feet of manuscripts, letters and other archival materials. For details, please contact the Archives as the finding aid for the main collection is not yet public. UNL also holds Wright Morris's heavily annotated personal library.

There are several biographies, among them:
Jackson J. Benson, Haunted: The Strange and Profound Art of Wright Morris. 2013. In HR
David Madden, Wright Morris. 1964. In HR

Friendship developed between Loren Eiseley and Wright Morris when both lived in Philadelphia, PA.