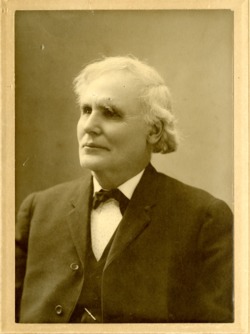 Attribution: The National Museum of the American Indian - Smithsonian Institution

Tibbles came West in his teens to fight against slavery, often alongside John Brown, in "Bleeding Kansas." He served as a scout and guide in the Civil War, and after the war worked as a journalist in Omaha. In part at the hidden instigation of General George Crook, Tibbles shaped the events, even as he reported them, that led to the 1879 trial of the Ponca Chief Standing Bear that declared that an Indian is a person, giving Native Americans protection under the Constitution for the first time. After the death of his first wife he would marry (1882) Susette LaFlesche, who had been Standing Bear's interpreter at that trial.

Tibbles' 1881 book The Indian Ring: A Secret History of Its Power, Its Operations, Intrigues and Machinations was a deep account of Washington corruption and profiteering that would seem familiar to any modern writer on the Unaccountable.

Tibbles wore many hats, as a church leader, as a farmer, and as a writer. He was People's Party nominee for Vice-President of the United States (1904) Working for the Omaha Evening World Herald, he was the first journalist to file a factual report on the massacre at Wounded Knee in December, 1890.

Joe Starita describes Tibbles role in his 2009 book I Am a Man: Chief Standing Bear's Journey for Justice, and there is a good overview of Tibble's varied career in the publisher's preface to the 1957 re-publication of Tibbles's Buckskin and Blanket Days (original 1905).

The Ponca Chiefs, An Account of the Trial of Standing Bear. 1879.
Hidden Power: A Secret History of the Indian Ring. 1881.
The American Peasant. 1890. (with Elia W. Peattie)
Buckskin and Blanket Days: Memoirs of a Friend of the Indians. 1905.