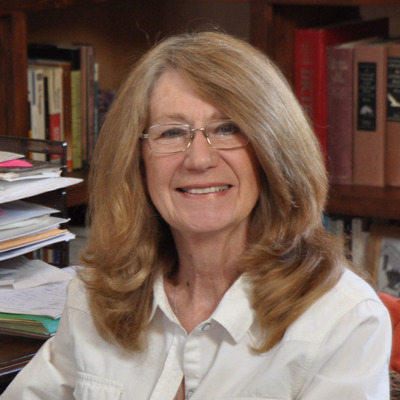 Attribution: With permission of the author

Dr. Bloomfield is a long time Professor of English at University of Nebraska - Kearney, with special interest in western literature, women's literature, and biography. She has written about Gilded Age journalist and reformer Elia Peattie. She introduced and edited Impertinences: Selected Editorials of Elia W. Peattie, A Journalist in the Gilded Age. 2005, which won the 2006 Nebraska Book Award. She is also the author of an on-line digital resource on Elia Peattie: Elia W. Peattie: An Uncommon Writer, an Uncommon Woman (1862-1935).

The Adventures of the Woman Homesteader: The Life and Letters of Elinore Pruitt Stewart. 1992.
The Platte River: An Atlas of the Big Bend Region. 1993. (Editor with Allan Jenkins)
Wellsprings: Poems by Six Nebraska Poets. 1995.
Kate M. Cleary: A Literary Biography with Selected Works. 1997.
A Prairie Mosaic: An Atlas of Central Nebraska's Land, Nature, and Culture. 2000. (Editor with Steve Rothenberger)
A Presidential Visit. 2002. (Editor with Steve Rothenberger)
Absolutely No Manners: On Having the Audacity to Write Biography. 2003.
Impertinences: Selected Editorials of Elia W. Peattie, A Journalist in the Gilded Age. 2005. (Editor)
From the Beginning: A Century of Excellence at the University of Nebraska at Kearney. 2005. (with Eric Melvin Reed)
Adventures in the West: Stories for Young People. 2007. (Editor with Eric Melvin Reed)

Bloomfield has been the author of several highly regarded digital publications:

"Letters of a Woman Homesteader and Letters on an Elk Hunt," texts by Elinore Pruitt Stewart, providing texts, related lesson plans, biography and critical materials. Although the hosting site http://scribblingwomen.org/index.html was selected by the National Endowment for the Humanities for inclusion in its own web site, EDSITEment, as one of the best online resources for education in the humanities, it is now inaccessible, except for front pages which can be seen at archive.org (November 22, 2010 version viewed)

Bloomfield has maintained a blog at http://drbloomfield.edublogs.org/

Lost Submissions: Our system was found to have lost submissions between May 10th and June 26, 2018. If you had submitted a suggestion for additional information or a new author, we ask you please re-submit it. We apologize for any inconvenience.