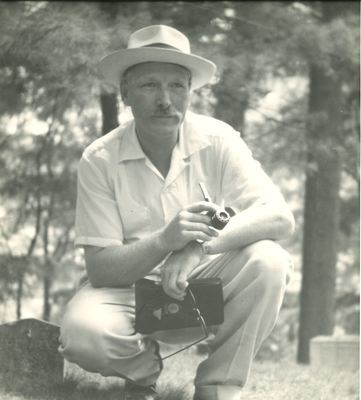 Rudolph “Rudy” Umland, 1907-1993, was a local farm boy who grew up near Eagle, Nebraska and became a prolific writer of essays, short fiction, local history, and book reviews. He was educated sporadically at the University of Nebraska in the 1930s. When he was too poor to stay at the University, he returned to his parent's farm and then took off to travel and find work as a hobo, riding the rails. When he eventually returned to the University, his intelligence and the generous sense of humor displayed in his writing attracted the interest of Lowry Wimberly, editor of Prairie Schooner. Wimberly and Umland became close friends and Wimberly persuaded Umland to join the WPA's Nebraska Federal Writers' Project. Wimberly and Mari Sandoz guided the project from behind the scenes, and helped Umland rescue the Project from a disastrous political appointee who was its first director. Umland became the Project's de facto editor, Editor (from 1935), Assistant State Director (1936-1940), and later State Director (1940-1941). Umland organized and edited the Project’s most significant publications. In his work at the Project, Umland befriended or worked with many writers, including Mari Sandoz, Weldon Kees, and Loren Eiseley. Heritage Room collections include his 15 volume Scrapbook, manuscripts and many letters in several collections. These collections document his early life, his education, travels as a hobo, work on the Federal Writers’ Project, his later writing, his military service and government career. He was an important informant for Helen Winter Stauffer in writing her biography of Mari Sandoz, and for Gale Christianson in writing his biography of Loren Eiseley.

Also see
The Nebraska Federal Writers Project: Remembering Writers of the 1930s for more about Umland.

Umland was also close to Wilbur Gaffney and Robert Carlson