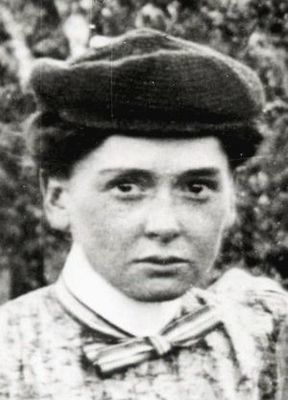 Louise Pound was a distinguished scholar of linguistics and literature who taught at the University of Nebraska from 1898 to 1945. Her friendships and influence reached from Willa Cather, Lowry Wimberly, and Charles Gere, locally, to H.L. Mencken and Benjamin Botkin. She was a classmate and friend to Willa Cather. She was a founder and the first editor of American Speech, and H.L. Mencken wrote that "it was her work, more than that of any other philologian, that had set the investigation of American English on its legs, and all my own writings on the subject since 1910 have leaned heavily upon it." (art. in American Speech, 1945)

Pound served as President of the American Folklore Society, 1924-1926, President of the American Dialect Society, and President of the Modern Language Association (a vice president in 1916 and the MLA's first woman President in 1955). As she helped put the study of the American language and of American folklore on firmer empirical foundations, she helped change the broader understanding of the subject matter. The scientific study of American folklore revealed its diverse sources and defeated the then reigning prejudice that American folklore was entirely Anglo-Saxon in origin. Similarly, in her scholarship, as in Mencken's, American language emerged as part of a living American culture woven together from conflicting ethnic, national, and regional cultures. The vitality of the American culture Pound and her literary friend Willa Cather described contrasted with the emptiness Sinclair Lewis portrayed in Main Street. Cather and Pound’s understanding of culture as a diverse and conflicted reality in the lives of individuals and communities, their appreciation of how individuals created stories and lives from cultural materials, and their eye for telling detail pointed toward a view of America that coalesced in the emergence of literary regionalism in the 1930s. Regionalism, in which Lowry Wimberly's Prairie Schooner played a leading role, pushed back the cynicism of the 1920s and favored a pragmatic view of culture that helped Americans sustain their unique virtues in the crisis of the 1930s.

Pound would be a sponsor and supporter of Lowry Wimberly in the English department at UNL. Benjamin Botkin, already a well known folklorist, came to the University of Nebraska to study with her. Her brother was the distinguished botanist and jurist Roscoe Pound. She corresponded with H.L. Mencken and Dorothy Canfield Fisher.

Aside from her many academic honors, she was a pioneering sportswoman, a world class tennis player, golfer and cyclist.

See the Louise Pound papers at the NSHS.

Nebraska 150 Books honor for Nebraska Folklore, 2017
“150 Notable Nebraskans”, Number 28 on the Journal Star Sesquicentennial List of Significant Nebraskans
For 12 years she was the one of the main speakers at the Regional Folklorist Conference at the University of Denver
Champion figure skater
Nebraska Women's State Singles champion, 1891-92, she also won in both men's singles and doubles
In 1955, she was elected to the Nebraska Sports Hall of Fame as the first woman Nebraska Hall of Fame

A List of Strong Verbs and Preterite Present Verbs in Anglo-Saxon. 1898.
The Comparison of Adjectives in English in the XV and the XVI Century. 1901.
The Periods of English literature. Outlines of the History of English Literature with Reading and Reference Lists. 1910.
Blends, Their Relation to English Word Formation. 1914.
Folk-song of Nebraska and The Central West: A Syllabus. 1915.
Poetic Origins and the Ballad. 1921.
American Ballads and Songs. 1923.
Ideas and Models. 1935.
Nebraska Cave Lore. 1948.
Selected Writings of Louise Pound. 1949.
The American Dialect Society: A Historical Sketch. 1952.
Nebraska Folklore. 1959.