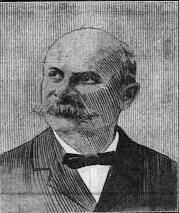 Edward Rosewater was born in Bohemia, emigrated to the United States, and served the Union as a military telegrapher in the Civil War. That work brought him into personal contact with President Lincoln, and Rosewater was the telegrapher who sent out the Emancipation Proclamation, delivered to the telegrapher's office by Lincoln, in person. His work as a telegraphist brought him to Omaha, where he eventually settled and ran successfully for the State Legislature. He founded the Omaha Daily Bee to support his political and civic projects. Both the paper and its editor were extremely opinionated and pugnacious, Rosewater indulged in street brawls with other Omaha journalists and business owners over controversies that began in the pages of his newspaper. In 1931, Addison Sheldon recalled the paper in its halcyon years, 1871 to 1910, as “the most successful and influential journal in Nebraska.” The paper fell on hard times under the editorship of Edward's son Victor Rosewater, and was eventually sold to the World Herald, which closed it.