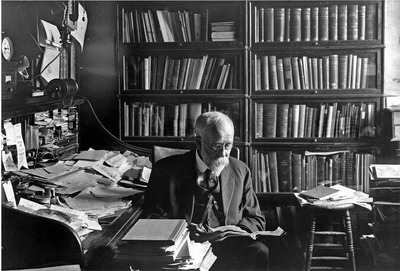 Professor of botany and horticulture at the University of Nebraska from 1884 to 1915, Bessey developed the Bessian system for classifying plants. He helped shape the role of land-grant universities in bringing practical knowledge to the public through agricultural experiment stations both in Nebraska and across the nation. He wrote congressional legislation defining the role of universities and their agricultural stations. President of the American Association for the Advancement of Science, he urged the federal government to plant trees in the Sandhills, leading to the creation of the National Forests along the Dismal and Niobrara rivers in Nebraska. He was also influential in getting state and federal protection for the giant sequoia trees in Calaveras County, California.
Bessey's position at the university obliged him to aid farmers. In a world without modern agricultural chemicals, devastating weed and pest invasions, like that of the Russian thistle in 1890s Nebraska, could only be fought with what we now call techniques of applied ecology. Bessey studied the distribution and life cycles of foreign and domestic crops and weeds to this end.
Bessey was the creator and mentor of a very distinguished group of botanists, which included Frederic Clements, Roscoe Pound and John Weaver who joined with others in Bessey's famous Botany Seminar known as "Sem.Bot.", organized outside the Department of Botany. These botanists came together in what has been called "the founding school of American plant ecology," beginning in the 1890s. As the mentor of this group, Bessey is sometimes credited with originating the study of ecology as a scientific field. The group created the vocabulary and paradigms that shaped the study of plant ecology until the 1950s. See Ronald C. Tobey, Saving the Prairies: The Life Cycle of the Founding School of American Plant Ecology, 1895-1955, 1981 (in the Heritage Room).

Professor of Botany
Associate Editor of the American Naturalist