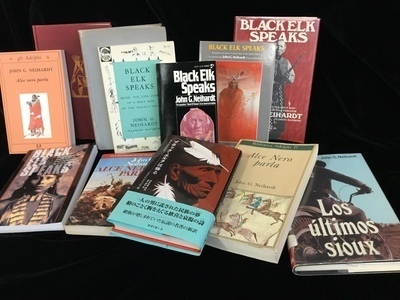 Famous Oglala Lakota (Sioux) medicine man, holy man, and teacher. Black Elk fought at the Little Bighorn, witnessed the death of his second cousin Crazy Horse, toured Europe with Buffalo Bill's Wild West Show, and was badly wounded in an attack on the Seventh Cavalry after the massacre at Wounded Knee. Later, Black Elk turned down requests to interview him, including Eleanor Hinman's request to speak to him for her Crazy Horse manuscript. But in the summer of 1930, he chose poet John Neihardt, with whom he felt great spiritual kinship, to record and preserve his vision, hoping the record might preserve the culture of his people against the destruction that had seemed to engulf them.

Black Elk's biographer Joe Jackson describes the interviews, recognized from the beginning by all parties as very important, as carefully structured, done in the presence of four Lakota elders, including the very eminent Lakota Standing Bear, who would provide illustrations, as paintings on deerskin, that appeared in the 1932 edition of Black Elk Speaks. The translations and re-translations went back and forth, through Ben Black Elk (Black Elk's son), until the parties agreed, with Enid Neihardt (the poet's daughter) providing a stenographic record.

Black Elk Speaks was published in 1932 to critical acclaim, but little wider interest. Only in the late 1960s did it gain a broad audience. The book's cultural importance to Native Americans has always been recognized, and there are many discussions of this. There will likely always be a lively discussion of how much Neihardt might have altered the account in making it into a work of literature. The family of Black Elk seems to have regarded it as a faithful account.

Black Elk transmitted two other significant works. When the Tree Flowered: An Authentic Tale of the Old Sioux World, published in 1951, also as a collaboration with Neihardt, seems intended as a prologue and introduction to Black Elk Speaks. The Sacred Pipe: Black Elk's Account of the Seven Rites of the Oglala Sioux (As told to Joseph Epes Brown), 1954, resulted when Brown, moved by reading the earlier works went to the Pine Ridge to speak with Black Elk, and found him--contrary to the expectations of others, including Neihardt's--willing to talk. All the books can be seen as part of Black Elk's carefully considered campaign to find sympathetic spirits to help him preserve what could be saved of traditional Lakota culture.