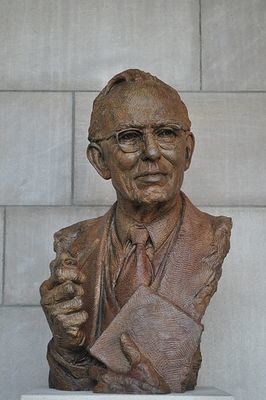 Alvin S. Johnson is famed as a co-founder of the New School for Social Research in New York in 1919. He led the institution for over 20 years, and as such he also led the effort to bring over and employ immigrant scholars threatened by Nazism before and during World War II.

As he was born in a log house near Homer, NE, he self identified as a pioneer and a Midwesterner. At the University of Nebraska, he studied along side Dorothy Canfield (aka Dorothy Canfield Fisher), Willa Cather, and Louise Pound. He graduated with a degree in Classics, served in the Spanish-American war, and earned a doctorate in Economics from Columbia University in New York in 1902. He served as the economics editor of the liberal magazine New Republic at its founding. In the face of the nativist and illiberal atmosphere that accompanied World War I, he joined Thorstein Veblen, John Dewey, Erich Fromm, and other scholars in founding The New School in New York in 1919. In 1923, he was made the New School's director, and he soon brought both Willa Cather and Roscoe Pound to its board of directors.

As scholars, especially Jewish scholars, sought to flee fascism and Nazism in the 1930s, Johnson, with the support of the Rockefeller Foundation, led an effort to bring important European scholars to the New School. Many of those scholars, ranging from Claude Levi-Strauss and Hannah Arendt, to Max Horkheimer and Theodor Adorno, would not have survived without the effort led by Johnson. Many of these scholars would teach at the New School.

He wrote almost 1000 articles and books, and was a tireless campaigner for social reforms. He is said to have written much of the eight volume 1927 (first edition) of The Encyclopedia of the Social Sciences. He also wrote a readable and informative autobiography, Pioneer's Progress, published in 1952.

Honored as 'Scholar, teacher, humanitarian and citizen of the world' in 1943 by a group of American and European scholars
Decorated by the Danish King
Was made an 'Officier de l'Ordre de Leopold II' by Belgium
On his 75th birthday he was made an Officer of the Legion of Honor
Nebraska Hall of Fame, inducted in 2014